We are here to help you if you need assistance with your release’s artwork. Whether it is simply arranging the finished art into templates for CD, tapes or vinyl or if you need a something a little more creative, we can assist. If we can’t do it, we know people that definitely CAN help!

Here are a few examples of our collaborations:

We get requests for t-shirt designs all the time. Sometimes they are for mass production and others are for one-off prints. The process of creating them is generally the same for both. We produce hi-resolution 300 d.p.i. images that short printers can use and can be assured of good quality prints.

We got an urgent request from Bev, asking for a design to be done pretty much on the same day, as they were going on tour and their original designer wasn’t available. We took a couple of hours, liaising on drafts before settling on the final design and getting the all-important image to the printers with time to spare! 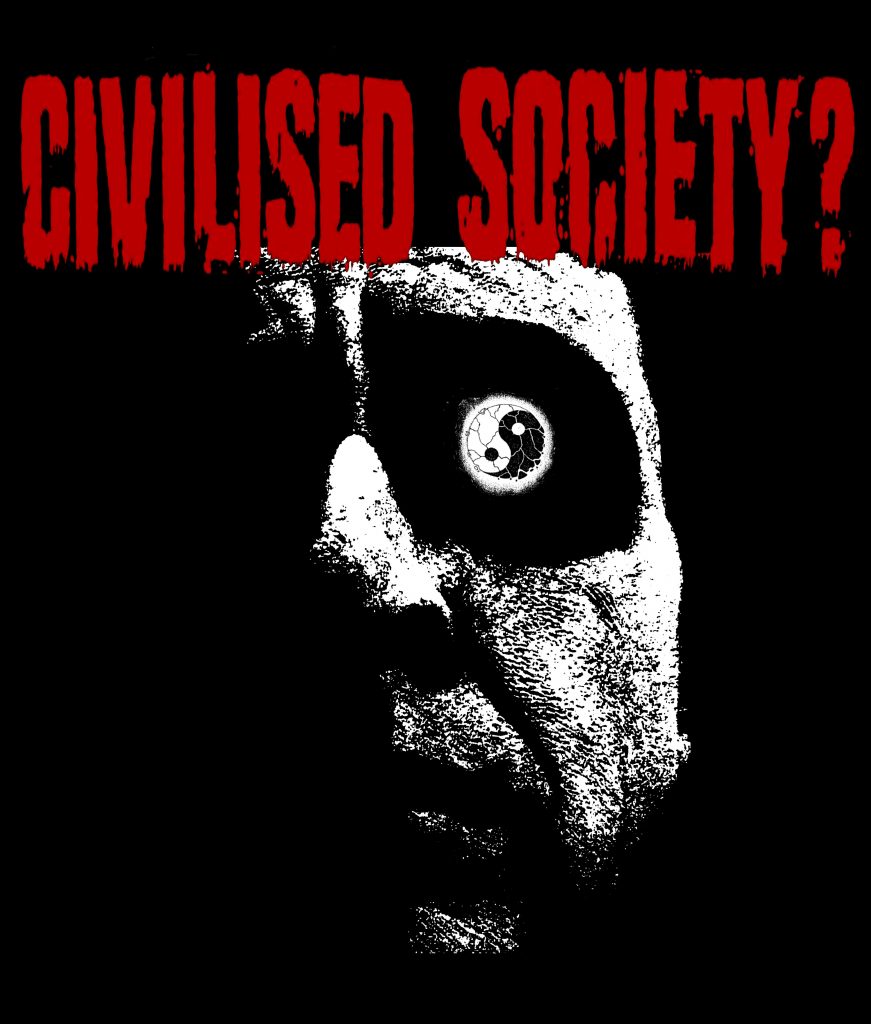 As part of our release of the compilation album CD, we created a t-shirt version of the cover artwork and passed it onto the band so that they could get some shirts printed up. A nice little extra that we loved doing for them!

We’ve done a fair bit of artwork for Hellkrusher over the years – here are a few of our favourites:

Taking the original Stivart artwork and turning into a shirt design along with an original logo (not the tonal version that was used on the original), we presented this to Scotty and he got the shirts printed up:

Another great Stivart piece from the Visions of War split EP with Hellkrusher. This time. we swapped out the original two-part logo for the longer version.

To coincide with their album release, The Undaclass also wanted a t-shirt design doing. As the original printer couldn’t do the full-colour version of the album cover, we created a 1-colour print version, which worked great.

We got requested to make some sticker and turntable mats to celebrate the 30 year anniversary of the band. Using titling that was used originally on Wasteland and several designs, we created circular art that worked very well:

Scruff got in touch and requested a quick gig flyer as the one that had been issued needed additional information adding to it. We obliged of course, re-inventing the flyer composition and making it really stand out:

SBR were requiring some quick turnaround art as their in-house artist was away and couldn’t finish the templating work. We stepped in and arranged it as requested:

We’d already arranged the finished artwork that was handed over by Serial Bowl Records, so that it was in the proper vinyl templates. A little later, we were tasked to produce a promo CD version. Rather than just simply reuse the artwork as-is, we re-purposed it to stand out in the CD wallet format, enlarging the text on the back, focussing the main composition for the front and creating a bespoke double-sided insert and a CD face with promotional text.

Andy was requiring a lot of work on his album cover and insert that was about to go to press. Being directed to us by Anti-System, we quickly learned what was required and came up with a striking front cover, using the supplied assets and adding our own touches to make it really special:

The Undaclass- A Bitter Taste Of Britain CD

As they were about to self-release their album “A Bitter Taste Of Britain”, The Undaclass wanted us to help out sorting the composition for the CD templates… we of course obliged and produced the booklet, tray card and CD imagery following direction from leader Denni, taking their original mockups of the concepts and producing something that they thought was simply great. We’ve released it on our label too, as we were so impressed by it!

Oh there’s more for sure, but these are just some samples – we’ve got stuff that we’ve done recently that will feature on here in the future. Of course, we always do our own art nowadays for our own releases, so most of our CD releases is art done by us and/or arranged into templates too.

Get in touch if you want to enlist our help with your projects!